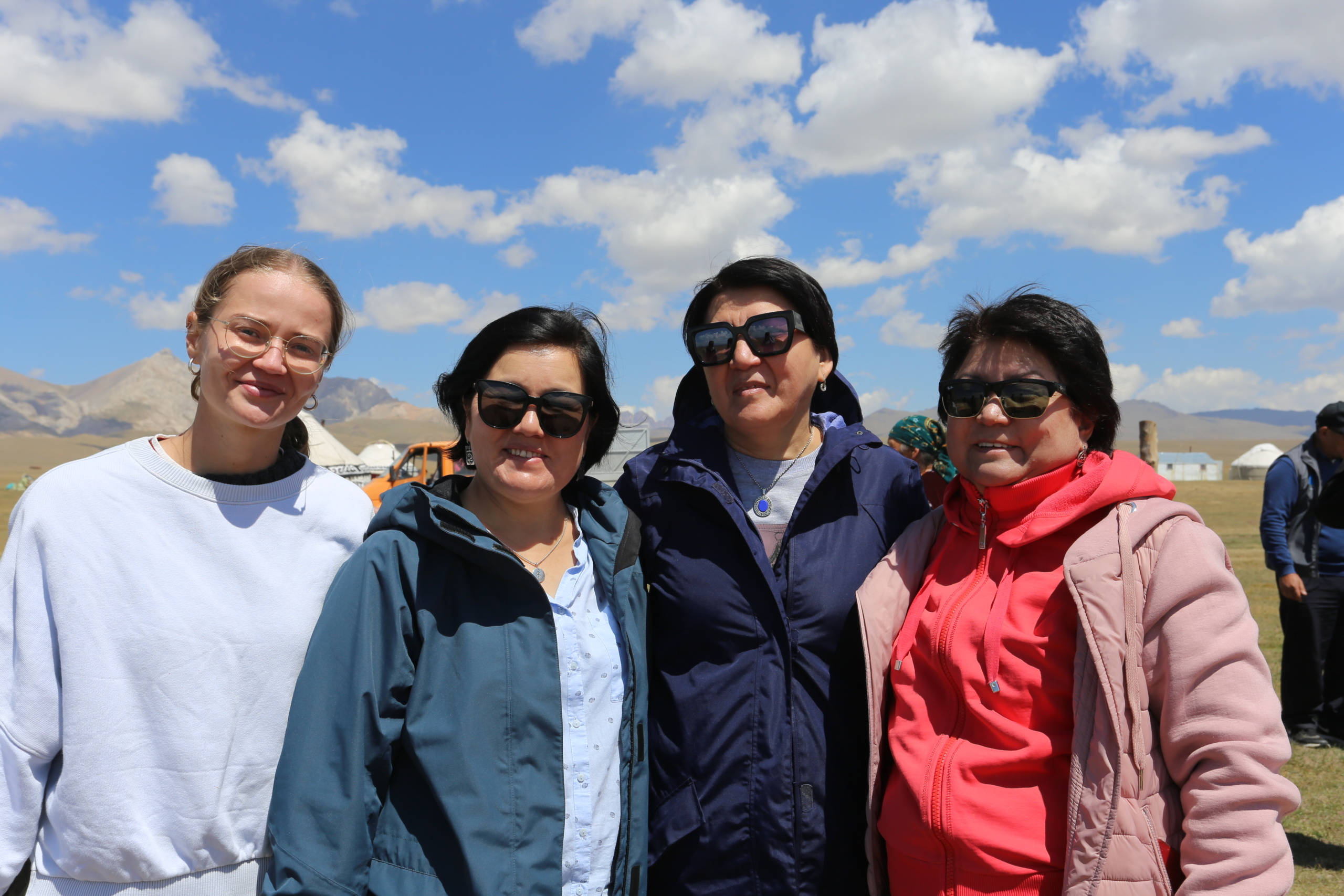 While writing my master thesis during the spring semester, I saw an interesting advertisement for a summer internship. As I already have conducted two internships and my second master degree was coming to an end, I mainly searched for permanent positions. However, I could not resist looking closer into the internship advert. The ad mentioned working with projects related to biodiversity and climate adaptation which I have studied, worked with, and have a passion for. I became more and more intrigued. As I scrolled down the text I saw that the internship would be based in Bishkek, Kyrgyzstan. “Kyrgyzstan!?”. I had very little knowledge about Central Asia in general. I thought: “The only thing I have planned for the summer is to go to Provence in June, so why not?” In retrospect, I’m very grateful I got this position as I have been lucky to meet new people whom I now call my friends, got to experience a new culture (the Kyrgyz food is so, so good!), learned a new language (well, a bit at least), learned a lot about environmental challenges and created memories of which I will remember for a long time. For example, I never thought I would enjoy drinking a glass or two of fermented mares’ milk!

My host organization in Bishkek, Institute for Sustainable Development Strategy Public Foundation (ISDS), is an NGO which has worked since 2012 to promote sustainable development in mountainous Central Asia, by building and strengthening community capacity and preserving biocultural diversity.

During weekdays, I mainly worked with fundraising and communication at the office next to my colleague and manager, both named Anara, all three in the room with the AC. We most often had lunch at the office, but when the weather was cool enough they took me to their favorite restaurants. After work, I often went to the huge Osh market to buy fresh fruit, vegetables, bread and herbs grown locally. On several occasions we went on field trips, for example to a vocational school who were the first one teaching organic agriculture and Issyk-Kul lake. On two occasions we went to Son-Kul, the country’s biggest freshwater lake where the project that CAG supports is located.

Son-Kul is located at an altitude over 3000 meters and its summer pastures have been used since ancient times. Son-Kul is one of the most beautiful places I have ever visited. During one day, the weather could start similar to a typical Swedish summer day and one hour later the rain could be pouring down, or even hayfall! At Son-Kul, we slept in a yurt with a fireplace keeping us warm, as the temperature drops drastically during the night. 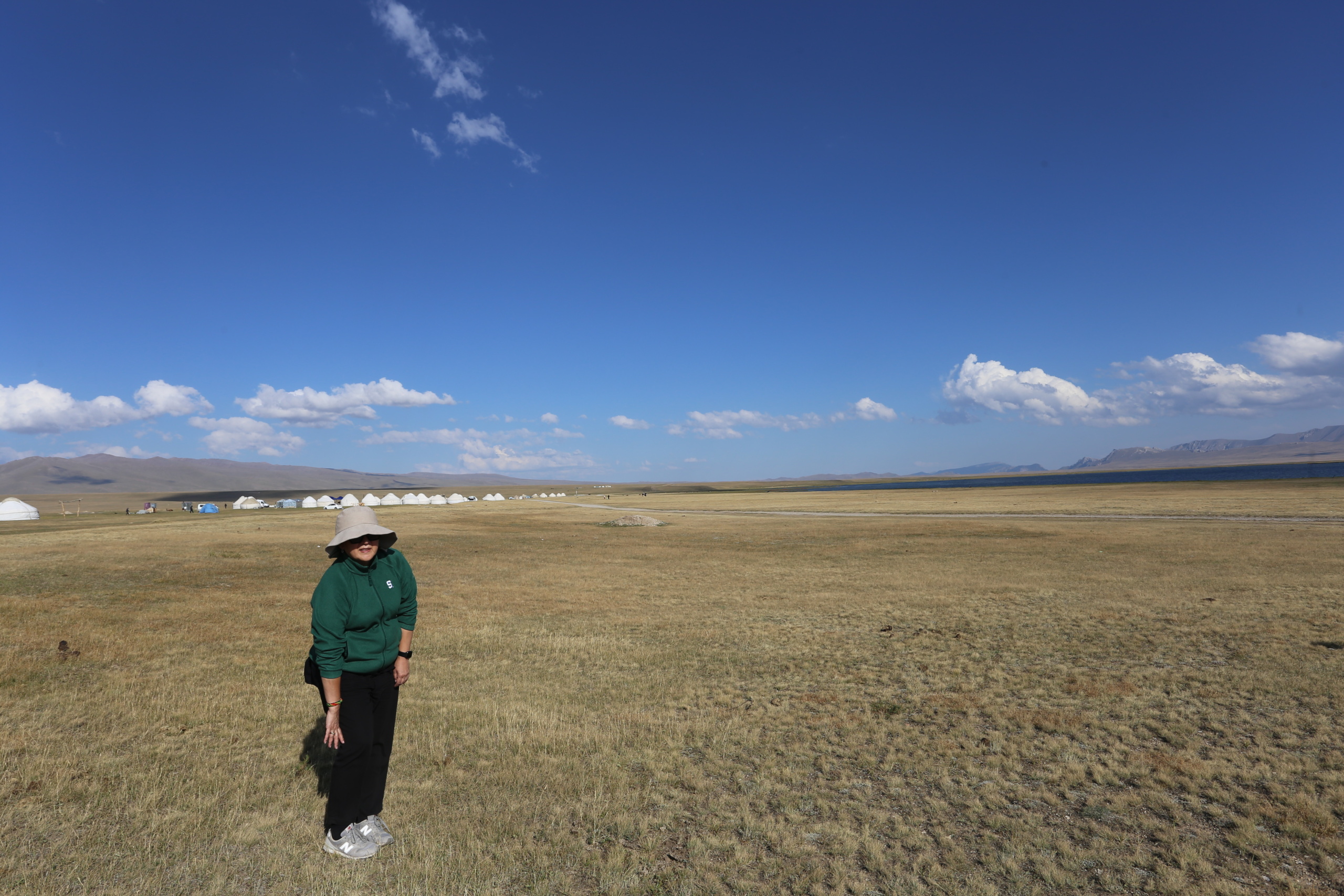 Anara A demonstrating how high the grass was 50 year ago at Son-Kul.

The ISDS team in the harsh Son-Kul sun. From left: Me, Anara M, Anara A & Borul.

The Son-Kul lake and its pastures are of vital importance for the area’s biodiversity and has been included in the International List of Wetlands of the Ramsar Convention since 2011. Due to the heavy cattle grazing (horses, cows, sheep and yaks), the pastures have been degraded and summering birds are disturbed and their nests destroyed. The project’s aim is to protect the lake by working together with local communities and to raise awareness about the dire situation, for example through environmental monitoring.

In mid-August, when my internship was coming to an end, ISDS arranged a festival at Son-Kul. The festival included theatre and poetry performances by students, singing and dancing, speeches by decision-makers and gamekeepers of the state reserve. Prizes were awarded to the most sustainable yurt camp among other categories. The lake attracts a large amount of both domestic and international tourists every summer. If the income generated from sustainable tourism increases (which has been the case in south Issyk-Kul) and in turn leads to less grazing, the lake’s ecosystem could have a chance to recover and be enjoyed by the following generations. 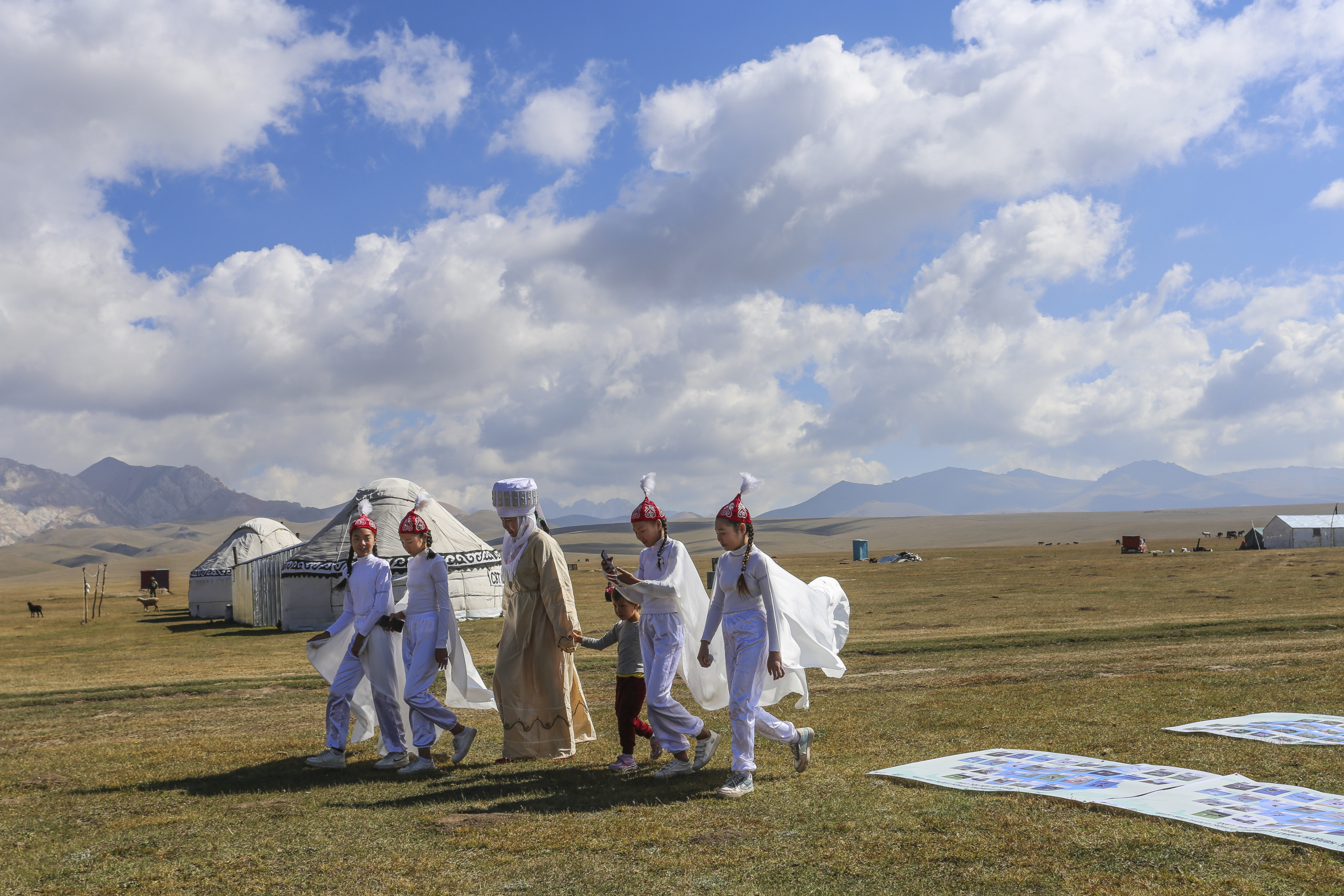 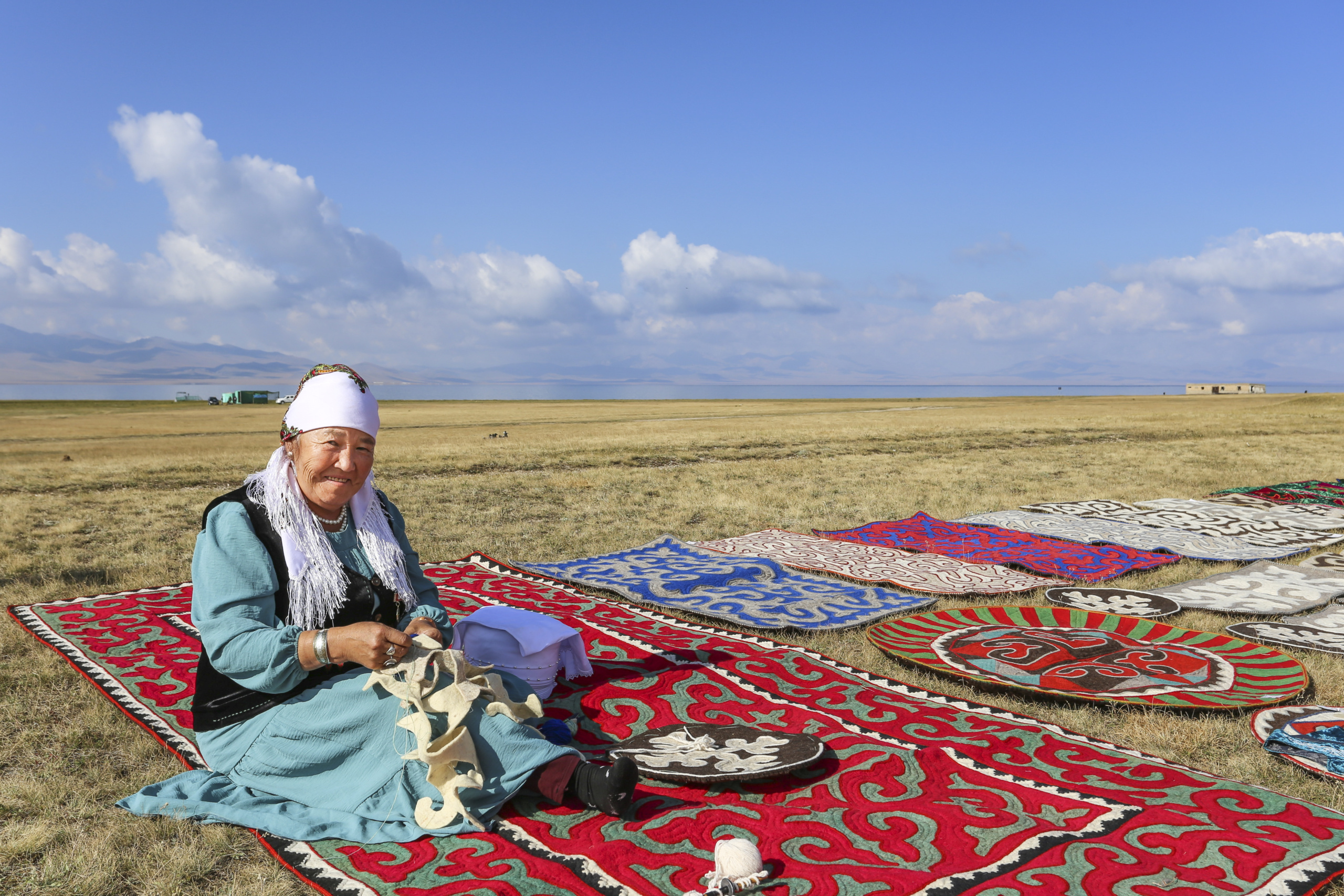 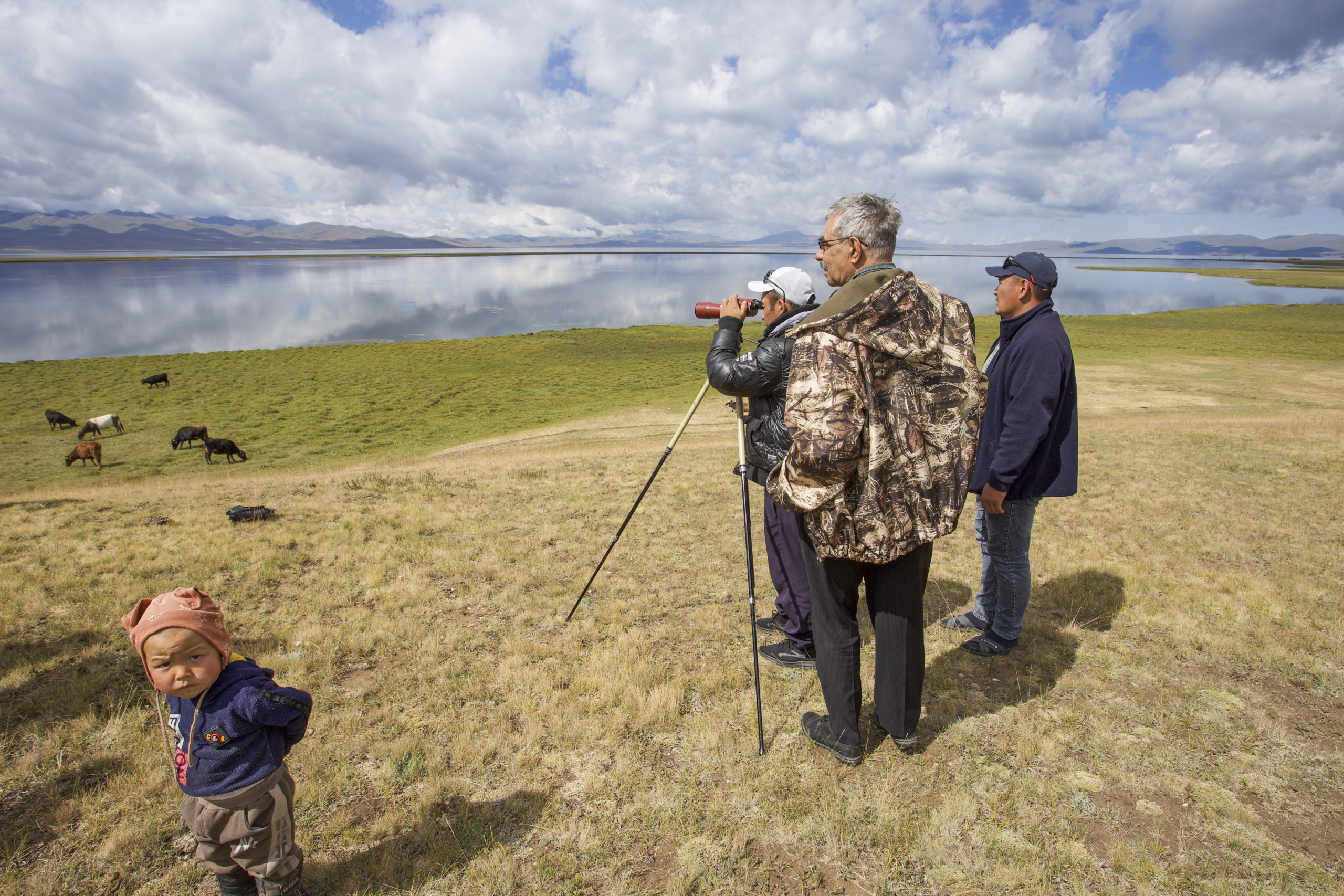 Bird monitoring by Anatoly Nikolaevich Ostashenko, scientist from the National Academy of Sciences, and Tunuk Toktomushev, Chairman of pasture users of Cholpon ayil aimak of Kochkor district of Naryn region.