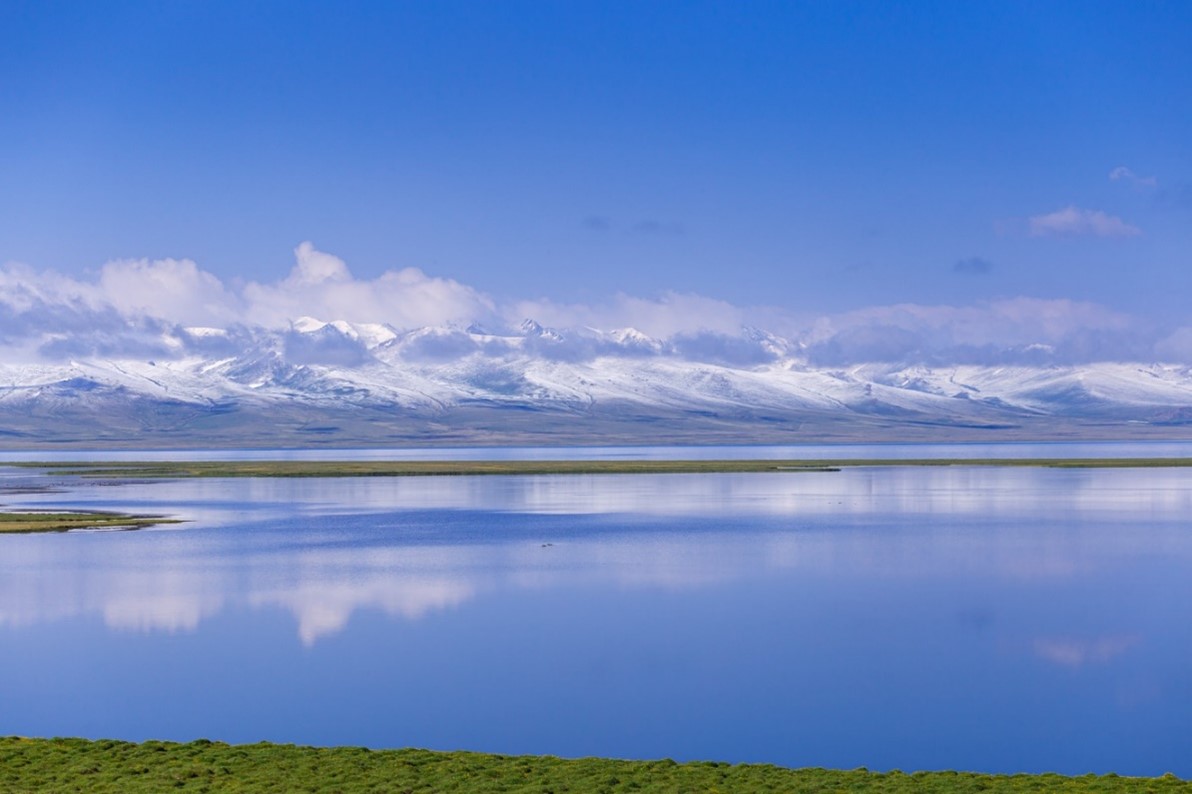 Back in 2020, Central Asia Solidarity Groups have launched “Strategic Resource Fund” to support civil society actors in Central Asia. It aims to provide resources for civil society actors for strategic interventions in their respective contexts. The fund primarily focuses on financial resources, but can also provide various forms of capacity building, international networks, and partnerships, long-term funding schemes, etc. Over the course of the past year, we have supported three projects in Kazakhstan, Kyrgyzstan, and Uzbekistan. All three of our partners within this funding scheme are grassroots and are closely tied to local communities – something that CAG has always prioritized.

One of the projects implemented by the Institute for Sustainable Development Strategy (Kyrgyzstan) has come to an end.  Together with a Pasture Union of Cholpon rural municipality, ISDS focused on enabling the sustainable use of natural resources, including wetlands, in the Son Kul area and raising awareness of local community members of the importance of preserving these unique territories. A study of biodiversity monitoring (inventory of flora and fauna and analysis of wetlands of the Son-Kul basin) was carried out by experts of the National Academy of Sciences of the Kyrgyz Republic together with local community members. As a result of the study, a scientific review was prepared on the main species of fauna, especially waterfowl living in the Son Kul area. In these territories, including their nesting sites, analysis of the current situation on biodiversity, problem areas were identified, and recommendations and proposals for sustainable management of natural resources were developed. 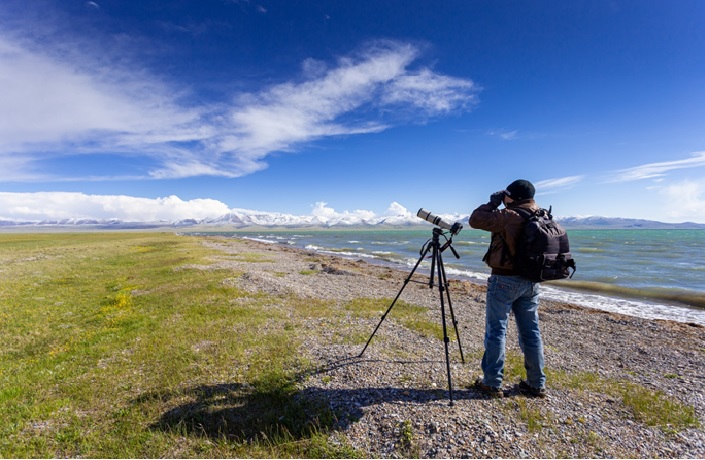 Askar Davletbakov (National Academy of Science of the Kyrgyz Republic) during monitoring of biodiversity/flora of Son Kul Lake on June 10-11, 2021

During a series of meetings, awareness of local residents, incl. pasture users of the Cholpon aimak/rural municipality and other aimaks of the Kochkor district, as well as representatives of local authorities, has been raised about the ecological and economic significance of natural resources, the importance of preserving the biodiversity of Son-Kul, and creating opportunities for the development of alternative sources of livelihood.

For a wider coverage and informing the population, a video entitled “Let’s Save Son-Kul” was developed to reflect not only the current state of the Lake and adjacent territories, but also raise issues of this area and offer some potential solutions to solve them. The video was posted in different social media networks (Facebook, Instagram, YouTube, etc.) and can be found on the following links:

In addition, a round table (RT) was held on September 23, 2021 with the main goal to create a system of management and monitoring of biodiversity of wetlands of Son-Kul Lake at the Naryn regional level. Over 30 representatives from the Naryn regional administration, Kochkor, Ak-Talinsk, and Naryn district administrations, local self-government authorities, “Kyrgyz Zhaiyty (Kyrgyz Pasture/Grass lands)” National Association of Pasture Users, Karatal-Zhapyryk State Reserve, national experts from Kyrgyz National Institute of Animal Husbandry and Pastures, National Academy of Sciences / Institute of Biology, University “Manas”, ISDS staff took part at this event. A result of the RT, participants agreed upon and signed a joint Resolution, which will be shared with the relevant state bodies to undertake the further steps.

In accordance with the Resolution of the RT agreed by all participants, it was noted that Son-Kul Lake is of great importance not only for Naryn province and Kyrgyzstan but for a global community since it has been included in the International List of Wetlands of the Ramsar Convention since 2011 and is of great importance as a nesting and summering place for waterfowl (131 species have been registered, of which 17 are included in The Red Book of Kyrgyzstan, 18 – on the Red List of the International Union of Nature Conservation (IUCN), 11 – CITES (The Convention on International Trade in Endangered Species of Wild Fauna and Flora) and 6 – Bonn Convention. Son-Kul pastures are used as summer pastures for livestock grazing for more than 13 rural municipalities/aimaks from 4 districts of Naryn region and are very important for the livelihoods of local communities, as livestock farming is the main source of income for rural households in Naryn region.

Some successful cases within the project:

The family of Roza and Ishenbek Chalbaev have been grazing livestock and hosting tourists in their yurt camp on the southeastern coast of Son-Kul Lake in the Batay-Aral area since 2006. According to their parents, there were many species of migratory birds on Son Kul Lake, according to Roza and Ishenbek over the 15 years of their summer migration to the lake, the number of birds has significantly decreased, largely due to local poachers. Through the visit of scientists from the Academy of Sciences and a meeting with representatives of “Pasture Users Union” of Cholpon rural municipality, they learned about the importance of preserving the Son-Kul wetlands. Previously, they were simply engaged in receiving tourists (mainly from France and Germany) did not even think about why they came to the lake. Now they realized that the main reason for the arrival of tourists is to see the unique wildlife, local biodiversity, mountain Son-Kul Lake with a large the number of waterfowl, the nomadic way of life of the Kyrgyz people. Currently, the family of Rosa and Ishenbek and their five daughters pay great attention to the protection of the Batay-Aral territory, issues of waste, rational use of pastures, and understand the importance of preserving the local ecosystem so that their children and future grandchildren can also enjoy the beauty and natural wealth of Son-Kul Lake. 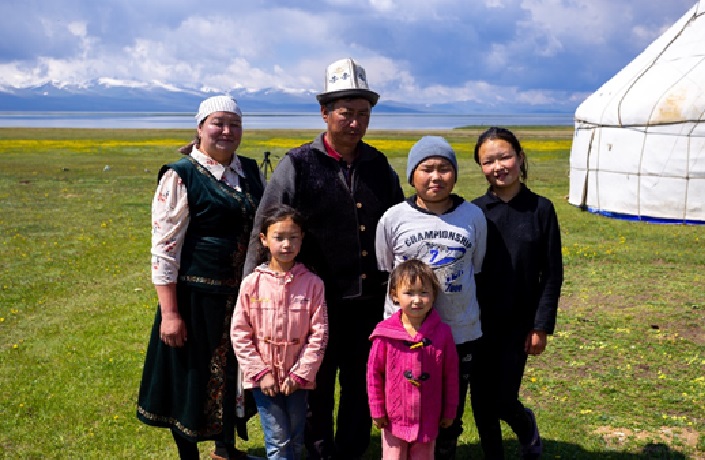 Another active member of Cholpon Pasture Committee – Tunuk Toktomushov has been working in the Cholpon Pasture Committee since 2019. Before participating in this project, he was mainly involved in infrastructure projects, such as the construction of bridges, roads, irrigation systems for the effective use of pastures. Meetings and joint trips with scientists of the Kyrgyz National Academy of Sciences and ISDS staff helped him to understand that in order to preserve natural territories and resources, it is necessary to inform and involve local villagers in the decision making to resolve these issues, to change their attitude, which has remained since Soviet times, when all decisions were made centrally, without real participation of local community. Thanks to his participation in the project, Tunuk was acquainted with the basics of biodiversity monitoring and participatory approaches in identifying the local needs for the conservation of biodiversity and pastures in Son-Kul and potential ways to solve them, which he currently actively uses in his daily work with pasture users.

Son-Kul Lake is located in the very heart of the Inner Tien Shan, 90 km north-west of Naryn. The hollow, 57 km long and 29 km wide, is located inside powerful mountain heaps. In the center of this basin is the second largest lake in Kyrgyzstan – Son-Kul. It is 29 km long and 17 km wide. Its surface is at an altitude of 3016 m above sea level, the area of the mirror is 270 sq. km, maximum depth 13.2 m. The lake is of tectonic origin, filled with fresh water. Son Kul Lake has unique ecologically, socio-culturally and naturally distinctive ecosystems. It has been included in the International List of Wetlands of the Ramsar Convention[1] since 2011. It is recognized as being of significant value not only for Kyrgyzstan where it is located, but also for the whole Central Asian region. The state of biodiversity in Son-Kul Lake area, including wetlands with waterfowl, pastures, largely depends on the sustainability of the whole mountain ecosystems of the lake, which play a significant role in soil formation, soil protection, and flow regulation from erosion in the catchment part of river basins, cleaning of surface pollution, prevention of floods, mudflows, and landslides.

Son-Kul Lake is very important as well as for the livelihoods of local communities. Livestock is the main source of income for rural households in Naryn province. The lake is surrounded by mountain ranges with an average height of up to 4000 meters above sea level, which are traditionally used as a summer pasture for grazing livestock. Naryn province, where Son Kul Lake is located, historically is one of the poorest regions in the Kyrgyz Republic with over 30% of the local population living in poverty who are directly dependent on natural resources and biodiversity and are already suffering from environmental degradation, climate change and natural or man-made disaster risks. It is evident that changes in the environment and climate have the greatest impact on rural communities whose resilience to such changes is very weak. Rural communities are the most vulnerable groups since they are directly and wholly dependent on natural resources for their livelihoods, cultures and wellbeing. 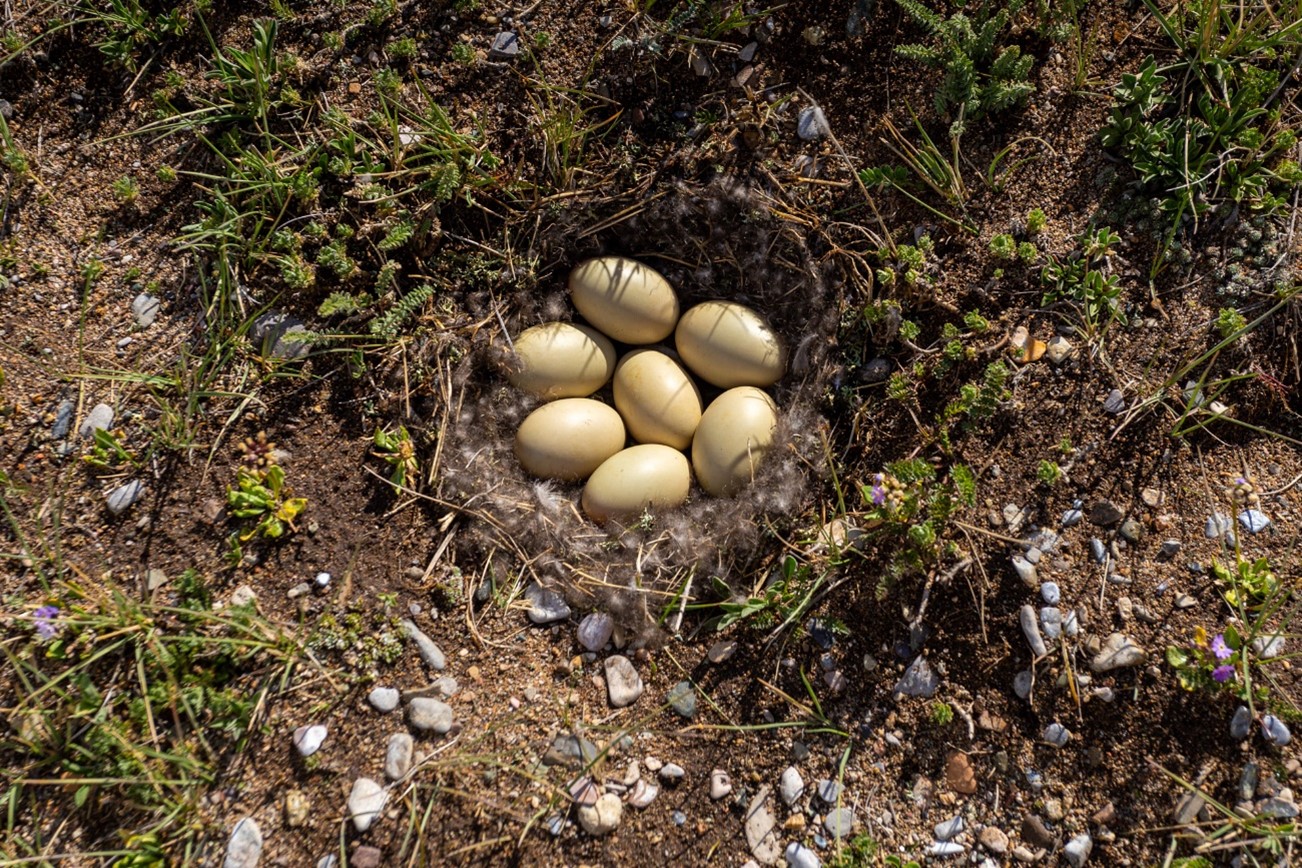 Lake Son-Kul is one of the intermediate points of rest and replenishment of energy resources for water birds making seasonal migrations between their nesting grounds in Kazakhstan and Western Siberia and wintering grounds in India and Pakistan. Serves as a summer molting site for many species of ducks nesting in Kyrgyzstan and adjacent regions of Kazakhstan. 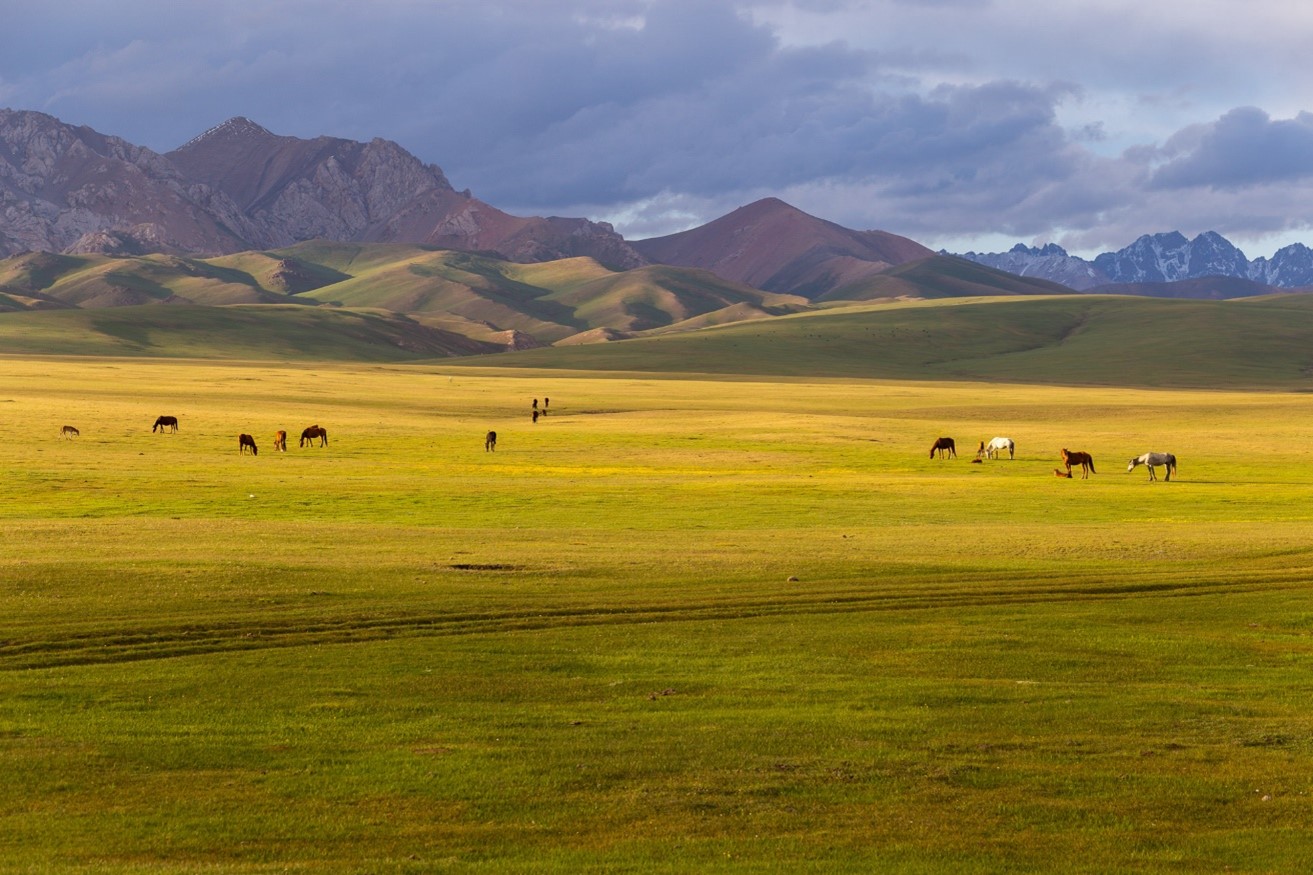 But, unfortunately, Son-Kul Lake and the surrounding areas are difficult to classify as nature that is little affected by human activity; during the warm period, herders and local tourist centers prevent the full habitation of migratory birds and the appearance of unique plants, for example, herds of horses, cattle grazing off the coast lakes destroy the nests of rare migratory birds, and an intensified process of pasture degradation is observed. In accordance with the classification adopted by the International Union for Conservation of Nature, state reserves belong to category I, where any economic or other activity that violates the natural development of natural complexes is prohibited. Despite this, livestock grazing and poaching on the lake itself continues on the territory of the reserve. Now the Red Book’s animals and birds are also at high risk, the main reason for this is unregulated hunting and summer fishing, coinciding with the breeding season of birds, grazing and poorly regulated economic activities. Among those problems: unsustainable use of natural resources in the Son-Kul Lake area; ineffective enforcement of environmental legislation and monitoring of other human rights violations; low local community awareness of the importance of wetlands and weak inter-sectoral interaction.