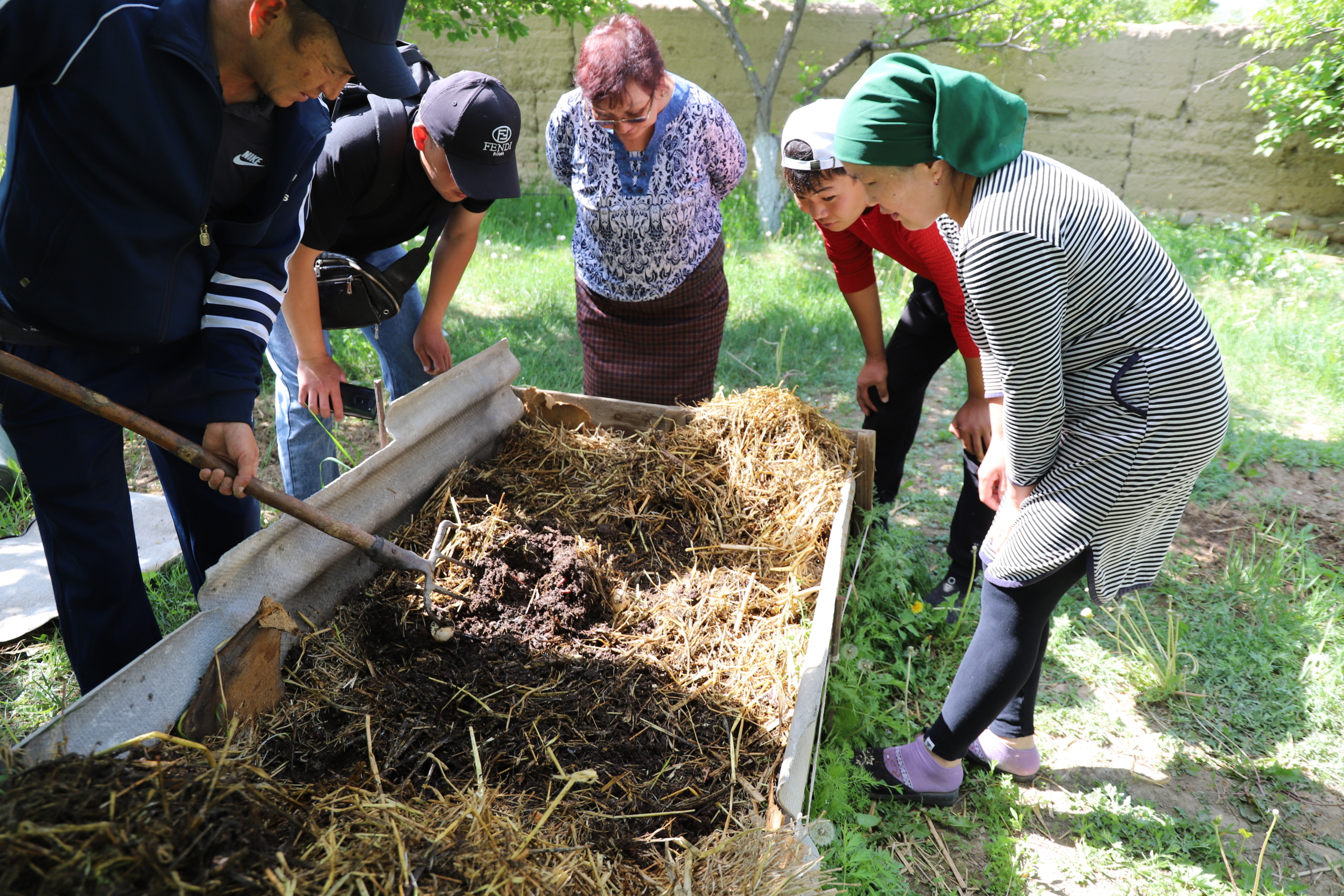 Since March 2021, CAG together with a local organization El-Too is implementing a project to introduce permaculture initiatives among 60 rural women of 5 villages in Kyrgyzstan. The goal of the project is promoting the womens’ role in land management, building sustainable livelihoods, facilitating gender equality and creating food sovereignty through permaculture kitchen gardens in semi-desert areas that suffer from land degradation. This is the second blog post about the project (you can find the first blog post here).

Taking into account the level of knowledge of farmers and geographic conditions described by the lack of water and precipitation, we have planned 4 successive practical training on permaculture on the following topics.

In April, the project conducted the first round of practical training and developing permaculture demonstration sites at each village. During the first training, women learnt how to create mulching or several organic layers on the land that would effectively retain water that is crucial for semi-desert areas. Next, as the season is short here, women learnt how to build a greenhouse to germinate seeds and compost all organic waste they have at home.

The beginning of May we moved the germinated seedlings from the greenhouses to the ground. All the seeds we have planted came out except for aubergines, artichoke and rheum. We have designed our demonstration sites according to permaculture principles based on consultation with Peter and Linnea, Swedish permaculture experts. We have planted several types of greens and salads close to the house, as we use them basically in every meal, and they should be more accessible compared to other plants we rarely use or ripen late. Next, we used the principle of “good neighbor” plants. We planted nitrogen fixing beans next to fruit trees that were planted new and were not growing so well. Our participants received a list of good neighbor plants. We recommended planting linen next to potato fields, as it chases the Colorado beetle – that is problematic in the region – away from potatoes. Pumpkins or other vertical growing plants were planted close to the fence, so they do not take much space and can grow along the fence.

At this stage, we introduced Californian worms, composting and biohumus production. As a basis for releasing worms, we have made raised bed filled with livestock manure (horse, cow and sheep). Our trainer explained that growing worms is a good way to get rid of compost or paper trash as worms can eat all except for plastic. The participants liked the idea as the country does not have any recycling system and in the rural areas there are no services to collect trash. We provided 5 kg of worms for each demonstration site. It proved it can be a profitable business for rural households as they have plenty of livestock manure. By August, they were able to produce up to 1,5 tonnes of biohumus. This amount is nearly sufficient to their main plots and even possible to sell. By the moment, the estimated amount of worms is 100 kg (8 dollar per kilo the market price) and 1500 kg biohumus (0,5 USD per kilo). So, the given activity showed that biohumus production can be a lucrative business for women with minimal labour inputs (watering 3-4 times), throwing compost regularly and possibility to earn up to 1500 USD in 3-4 months. This activity became very attractive to other participants and villagers, that some of the village residents came to visit to learn our experience and bought to grow them.

In May we built a big version of greenhouses (3 x 5 meters) in three of our demonstration sites that had harsher climatic conditions (above 2200 meters). On suggestion of women to experiment, we planted tomatoes, Chili peppers, capsicums, strawberries and rucola inside the greenhouse. For residents of Toguz-Bulak village, where the local population grows only potatoes, carrots and red roots or such cold-bearing plants, it was exciting to see the ripening strawberries. 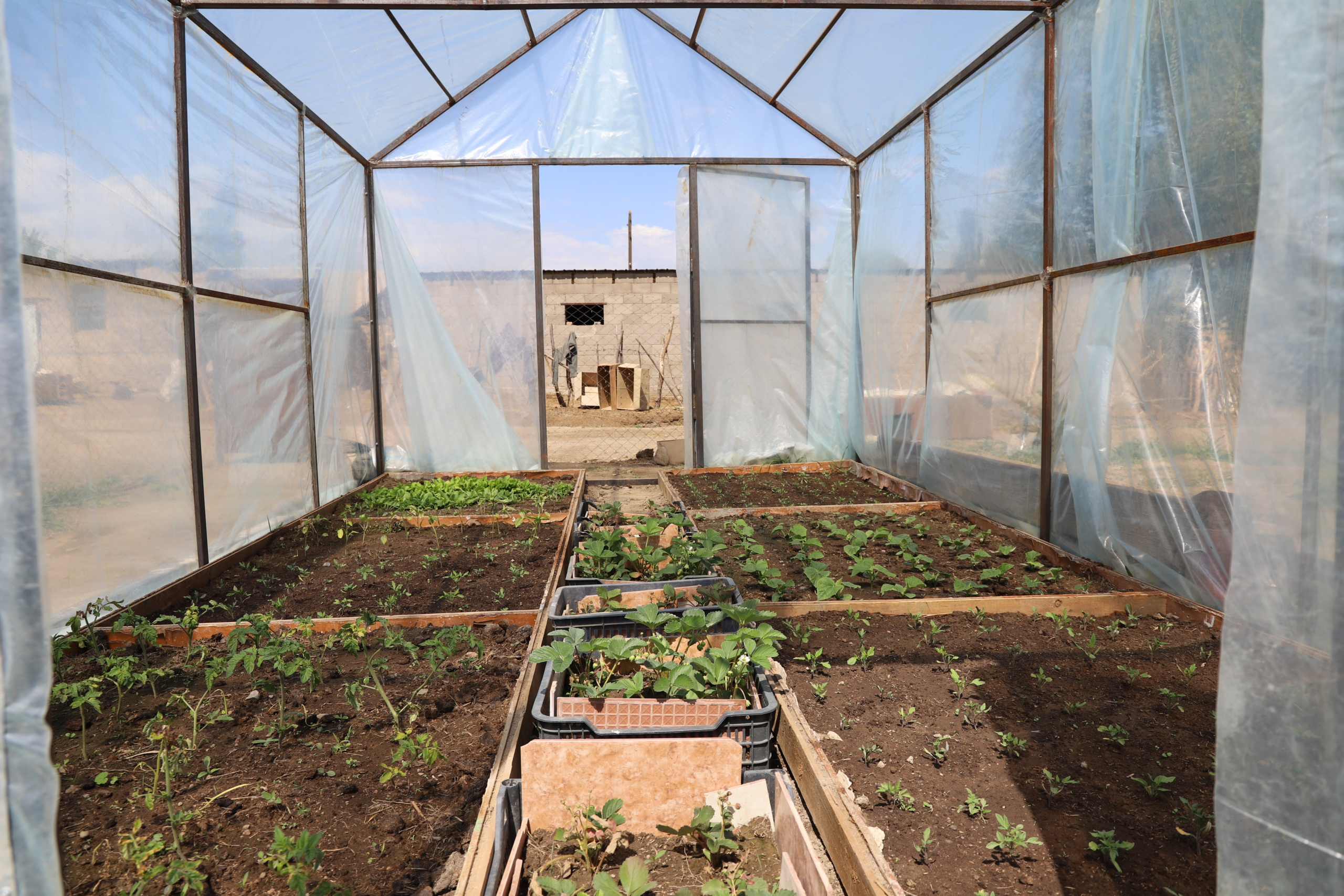 One of the important components of our project was introducing water saving techniques to kitchen gardens. The villages irrigate their gardens following the Soviet technique, the canal irrigation. However, year by year, the irrigation water is only allocated to main plots with main crops and kitchen gardens do not receive any water. As a result, women are not motivated to keep kitchen gardens or use the drinking water for irrigation illegally. We experimented collecting the rain water and introducing the system of water tanks. We provided two of our demonstration sites with 1 tonnes water tanks. The practice showed that they can collect up to 300-400 liters of rain from the rooftop in one raining time. Next, we also introduced the drip irrigation system in 5 demonstration sites. We learnt from the participants that the local population think that drip irrigation systems are expensive and thus farmers cannot afford it. However, by establishing them in our demonstration sites, we have proven to the local population that a 100 dollar investment can be sufficient for 5 acres of land. Next, we made raised beds, by dividing into sections our gardens. As families irrigate by canal system or just letting out the water from the pipe, the strong water current can take away all minerals in the soil and can erode the ground. We tried simple raised bed versions from wooden logs or stone and explained to our participants how they can save water and have fertile land. In addition, we also introduced digging charcoal inside the soil, so they can retain water for longer.

The next problem that is widespread among the villages is the usage of chemical fertilizers by word of mouth. The region lacks competent agronomists and as a result, since the collapse of the Soviet Union, smallholder farmers grow crops without institutional support. 3-4 years ago, the region suffered from fire blight, a disease that can kill blossoms and shoots and cause dieback of branches from cankers. The region’s pears died of the given disease. With our agronomist Azamat and the expert in biotechnical treatment Kyal from the Organic Agriculture Department in Karakol, taught to choose right seedling trees, not to bring disease to their gardens and the importance of planting local and tested seedlings. During the training, participants learnt to use “golden-eyed” insect plates (золотоглазка) against aphids in the fruit trees (trichogramma) to use against diseases in vegetables and trichodermin against rotten vegetables and fruits. During the seminar, participants learnt that due to useful ladybugs, they had a good harvest of black currants, as these ladybugs eat the harmful aphids in the plants. In addition, they identified the diseases not only in kitchen garden plants, but also fruit trees and potatoes. It was motivating for women that they can use organic ways of fighting the vegetable diseases, not using chemical treatments. In addition, the price was cheaper compared to chemical treatment and they were available in Karakol to buy. So, several participants ordered these treatment remedies from Kyal.

Since the end of May, our first harvest has appeared: raddish, and a variety of herbs and greens such as rucola, basilic, salad leaves, different kinds of parsley, spinach, celery. The use of kitchen herbs is not widespread in the Kyrgyz cuisine. People mainly use dill and green onion, and in some meals parsley and celery. Women were asking what to cook with all these herbs that were actively growing in their gardens. So in our WhatsApp groups and social media pages, we shared recipes that used these herbs in everyday meals: such as spinach and rucola salad, rucola pizza, sauce pesto with basil etc. And also recommended to dry herbs and mix with salt, as a regular dressing for vegetables salad they prepare often.

July and August were the months of main harvest, especially for the vegetables that were introduced new in the region. Originally, only a few families would grow some white cabbage. As for cauliflower, broccoli, Chinese cabbage, and red cabbage they have never tried growing, and some of them women even never tasted in their life and hardly knew the name. Our experiment with Chinese cabbage, broccoli and cauliflower went well even though with some challenges. The first round of broccoli and cauliflower had blossomed instead of giving crops. We later realized that our seeds were not right to the location, and to prevent this problem we could create a shade, bundling their leaves. Our local agronomist also missed this part, as he had no experience growing such cabbages. Nevertheless, the second round we were able to get crops and proved that any kind of cabbage can grow outside, even in a mountainous climate of 2200 meters above the sea level. In August we organized for women the first round of cooking and food safety training, where women learnt to cook with new products: salads, pizza, herbal salt and jams, and tea and lemonade. To further share our experience with people that were not directly involved in our seminars, we asked our participants to shoot videos in their garden and share their positive results, learnt lessons and challenges they faced.