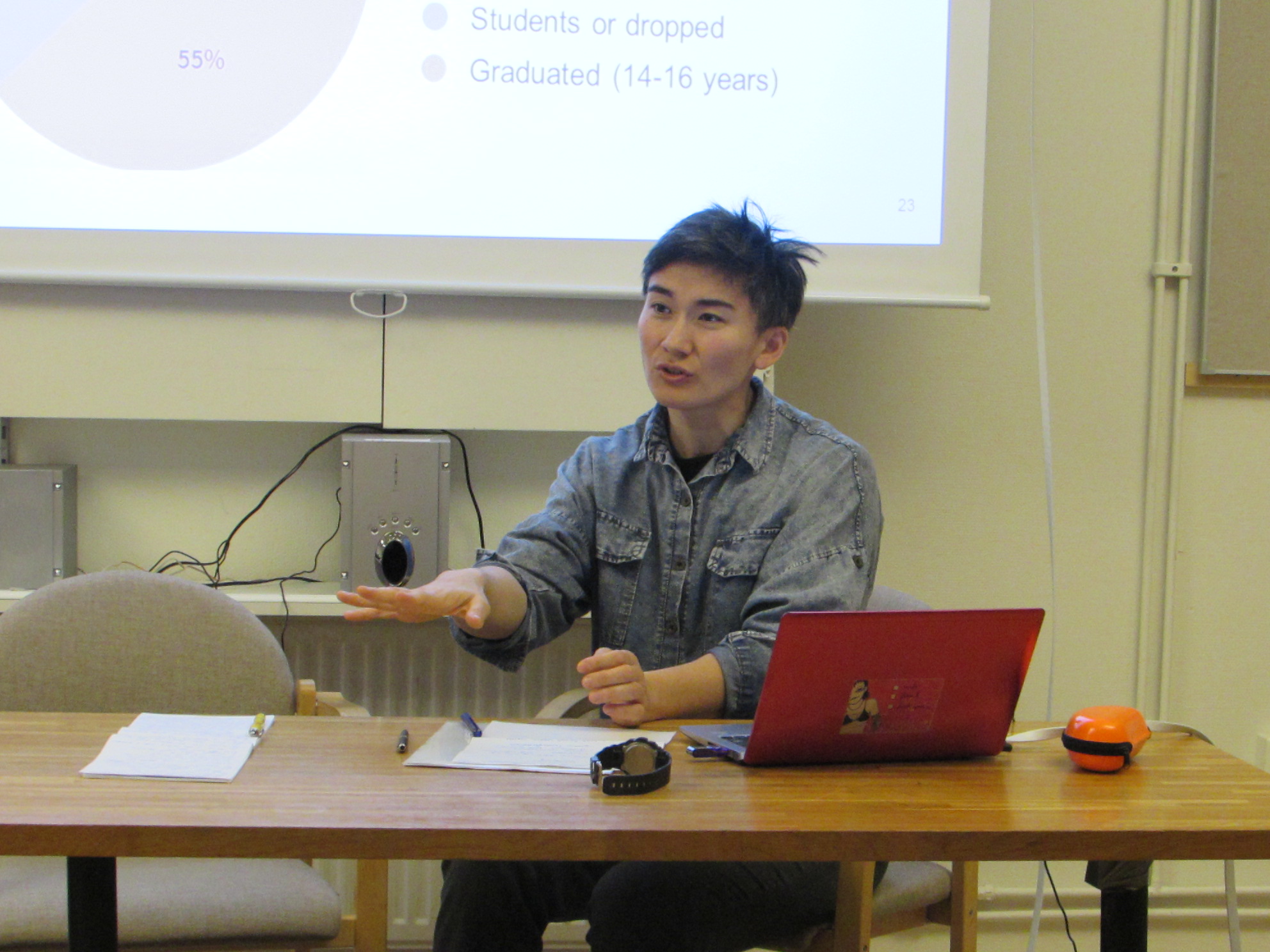 It has been a hectic year for Zhanar Sekerbayeva. Recently, Zhanar and her colleagues at Kazakhstan Feminist Initiative «Feminita» finalized 228 surveys and 43 interviews with lesbians, bisexuals and queer persons in Kazakhstan.
– People sometimes say that we don’t have any lesbians in Kazakhstan. Here’s the proof that they are wrong and also a needs assessment of this group.

Zhanar Sekebayeva was one of the participants at the Central Asia Days that were held in Stockholm on November 26-27, 2017. She was invited as one of the representatives from the feminist activist group Kazakstan Feminist Initiative «Feminita».

During the conference, Zhanar gave a talk about the study/needs assessment that she and her colleagues have been working on the past two years.

– There are for the time being no research made on the situation for LBTQ-women in Kazakstan. We wanted to change that and present a sociological portrait of women specifying their needs and agenda, that’s why we did this study, Zhanar says.

Thanks to the internet and different informal channels, the group managed to get in touch with 228 Kazakh people who identified themselves as either lesbian, bisexual or queer.

– We wanted to map out the legal, judicial and economic situation for these groups in Kazakhstan. It’s not about separation and categorization of people, but about highlighting that people have different needs, Zhanar says.

The study shows that about half of all the interviewed people have been exposed to violence due to their sexual orientation.

– But there is a problem with the definition. Most people refer to physical violence, but forget about other kinds of violence, like economic, social, psychological. To not be able to walk on the street and hold hands with your partner is also a kind of violence.

Moreover, the study shows that access to internet and contact with international human rights defenders are important to many people in this group.

– LBTQ-people in Kazakstan are discriminated on many levels in the society, Zhanar says.

In the constitution of Kazakstan, it is stated that all people are held equal towards the law. It is also stated that no one should be subjected to discrimination due to race, nationality, religious beliefs or any other circumstances.

– Homosexuality is included in ”any other circumstances”, but it’s very vague and no one really gets what it is, Zhanar says.

Before Zhanar got involved in Kazakstan Feminist Initiative «Feminita», she worked as a journalist for many years. She used to write stories about the most vulnerable groups in society, but every time she suggested that they should write about gays and lesbians and their situation, her colleagues and superiors would tell her that it was uninteresting.

– If media writes anything about homosexuality it’s usually done in direct connection to pedophilia. There’s a constant misinterpretation of the terminology, she says.

On a demonstration 2014, protesting against the constant devaluation of the Kazakh currency, Zhanar got arrested by the police, even though her protest had been peaceful.

– On that day I decided that it was enough and that I wanted to do something about the injustices in life and which are related to the group of people with whom I identify myself. If we’re just sitting at home, staring out of the window – nothing will ever change, she says.