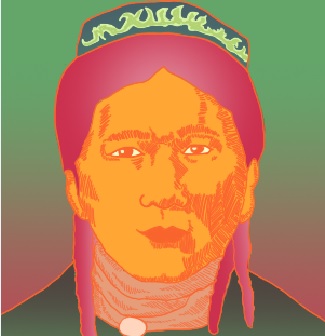 In 1910, in the Nookat district located in the Osh oblast, Urkuya Salieva was born into a peasant family. She was an activist for social change and women’s rights in the early years of socialism and has sometimes been called the “heroine of the era of collectivization”. Already at the age of 17, she became secretary of the Komsomol (Комсомол, short for Коммунистический союз молодёжи) – a Leninist communist political youth organization in the Soviet Union.

Four years later she joined the Communist Part and became a member of the Central Executive Committee of the Kyrgyz Autonomous Republic. Additionally, she was elected chairperson of the collective farm Kyzyl-Asker (later named after Urkuya Salieva). Shortly thereafter, in 1934, Salieva and her husband were murdered by Basmachi fighters, who were part of the anti-Bolshevik movement which at the time had control over large parts of Southern Kyrgyzstan in the years 1917-1926.

Today, in Bishkek, a monument dedicated to Urkuya Salieva and the political movement she was part of is to be found in a park on Chui Avenue. There is also a film from 1971 called “Poklonis Oglyu” (“Поклонись огню” – roughly translated to “Bow to the Fire”) in which Tattybubu Tursunbayeva portrays the short life of Urkuya Salieva.