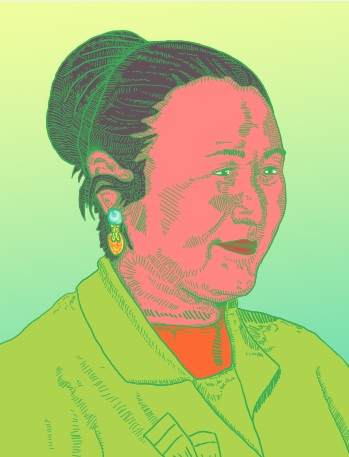 Saadat Nogoyeva was born in Nooken district in Southern Kyrgyzstan in 1921. She became an orphan before the age of 10, and was then raised by relatives. At the age of 14, she started picking cotton at the farm of her relatives. In 1939, she is known to have picked as much as 10 tons of cotton during the harvesting season.

In 1940, Nogoyeva started studying mechanics and soon thereafter received the right to drive the tractor. After mechanical developments in agriculture, Nogoyeva managed to set an impressive personal record of 185 tons of cotton during one season in the late 1950’s. She was twice elected Deputy of the Supreme Soviet of the USSR, and three times the Deputy of the Supreme Soviet of the Kirghiz SSR. In addition, she was awarded two Orders of Lenin and one badge of “Excellence in Agriculture”.

In her memory, there have been an award to agricultural mechanics in Osh oblast, and there is also a secondary school named after her in Nooken.