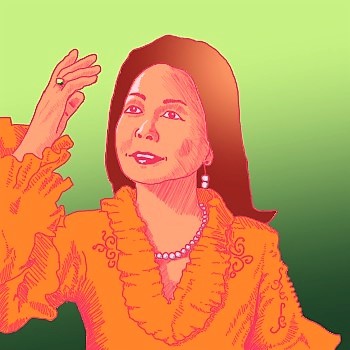 Salamat Sadikova, known as the ”voice of Kyrgyzstan”, was born on 28th of September, 1956. She is native to a village called Kyzyl Jol, located in Batken oblast in Southern Kyrgyzstan. In the early years, living in one of the most conservative areas of Kyrgyzstan, she faced prejudice being a woman performing with her singing and playing on the three-stringed lute komuz.

Eventually, she broke through the glass ceiling and became the leader of Kambarkan Folk Ensemble. Sadikova has done numerous international tours and won several awards, such as the People’s Artist of Kyrgyzstan and the State Prize of Toktogul. Throughout her whole life she has pursued her country's folk music, and with her musical abilities Sadikova has rightfully earned her title as the voice of her nation. She released her first international album “The Voice of Kyrgyzstan” in 2002, which has gained a lot of praise especially seeing as everything was recorded in a single take making it a remarkable piece of art inviting others into the region’s history and culture.