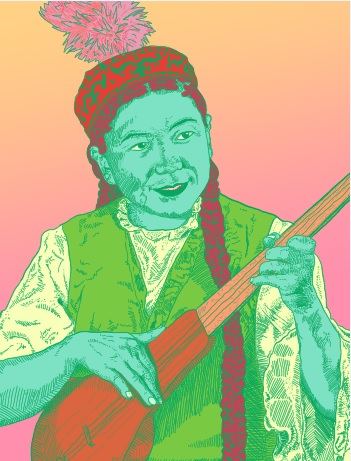 In Talas oblast, in the village Kalba, located in the mountains of Northern Kyrgyzstan, Meylikan Kozubekova was born in 1932. Today, she is known as one of the first female ‘komuzists’ in the country. The komuz is a 3 stringed instrument, similar to a lute, and it is highly celebrated in Kyrgyzstan and other parts of Central Asia. At a young age, she left a note for her parents and then ran away to Frunze to become a musician.

At the young age of 15, she was accepted at the Kyrgyz state philharmonic named after Toktogul Satylganov. In 1957, Kozubekova won the 11th World Youth Festival, which was held in Moscow that year. She developed her skills and became a renowned composer and player of the komuz, travelling to many countries, especially in Eastern Europe and Central Asia. She was awarded the title of Honored Artist of the Kirghiz SSR, amongst other medals and diplomas. Unfortunately, Meylikan Kozubekova died of illness when she was only 41 years old.