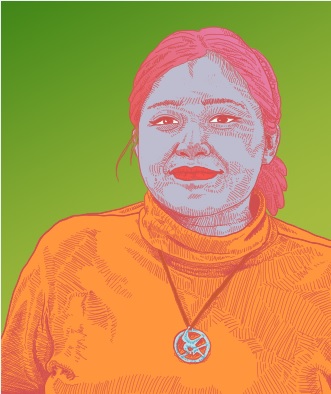 Ainagul Amatbekova was born on January 11, 1996, in Osh located in Southern Kyrgyzstan. As a child, she had several different dreams of what her future profession should be, including teacher, stewardess, and lawyer. At a young age, she started working as an intern at a local beauty salon and she was aiming at one day having her own business. This was one of the reasons to why she started studying English and Business in 2013 at a tailor institute in Osh. Soon after, she started her social engagement, which in the beginning was only motivated by wanting to improve her English skills.

In March 2014, she was invited to take part as a volunteer on a campaign highlighting violence against women. This campaign was a cooperation by UNWomen, a local youth committee and Novi Ritm (Russian: Новый Ритм). This became her first volunteer experience and the start of a new path for Amatbekova. She increased her span of interest and learned about women’s rights and gender equality in the non-governmental organization Novi Ritm’s Girls’ Group. Through the same organization, she went on a two-week exchange program to Sweden in April 2015 and came back with a lot of ideas on how to combat violence in her community. One of these ideas became a four-month project highlighting the issue of street harassment, which was cause for several nominations and winning the title of Best Youth Mobilization.

During 2015, she had her first job interview ever, and got a coordinator position at Novi Ritm, where she has been working ever since. At Novi Ritm, she has worked a lot on several small and big problems addressing social issues in Southern Kyrgyzstan. Since May 2016, she has been the elected Chairperson of Novi Ritm and dedicates most of her time to the organization. At the same time, she has been studying at Osh State University in the Faculty of International Relations, which she will graduate from in 2017. After that, she is considering doing a Masters in Law.

Check out this cool article by Ainagul which provides a glimpse of the work of Novi Ritm: “A graphic threat: using comics to combat stereotyping in Kyrgyzstan” - https://www.insightonconflict.org/blog/2016/06/55579/